Pennsylvania is home to a large crop of exceptional Standardbred horse breeders, including the world’s leading farm, Hanover Shoe Farms. Many winning horses of the sport’s most prestigious events, such as the Hambletonian, Kentucky Futurity, Little Brown Jug and Breeders Crown, have been bred in the Keystone State. To learn more about Pennsylvania’s rich Standardbred breeding heritage, view our breeder farms map.

Not only is Pennsylvania home to the best Standardbred farms in the world, but it has the breeder incentives to boot. With $10 million worth in breeder rewards when slots revenue has fully funded the program, there are ample opportunities for PA-sired, as well as PA-sired and -bred owners to win bigger than their out-of-state competitors. To learn more about these incentives, please visit standardbredbreederspa.com. 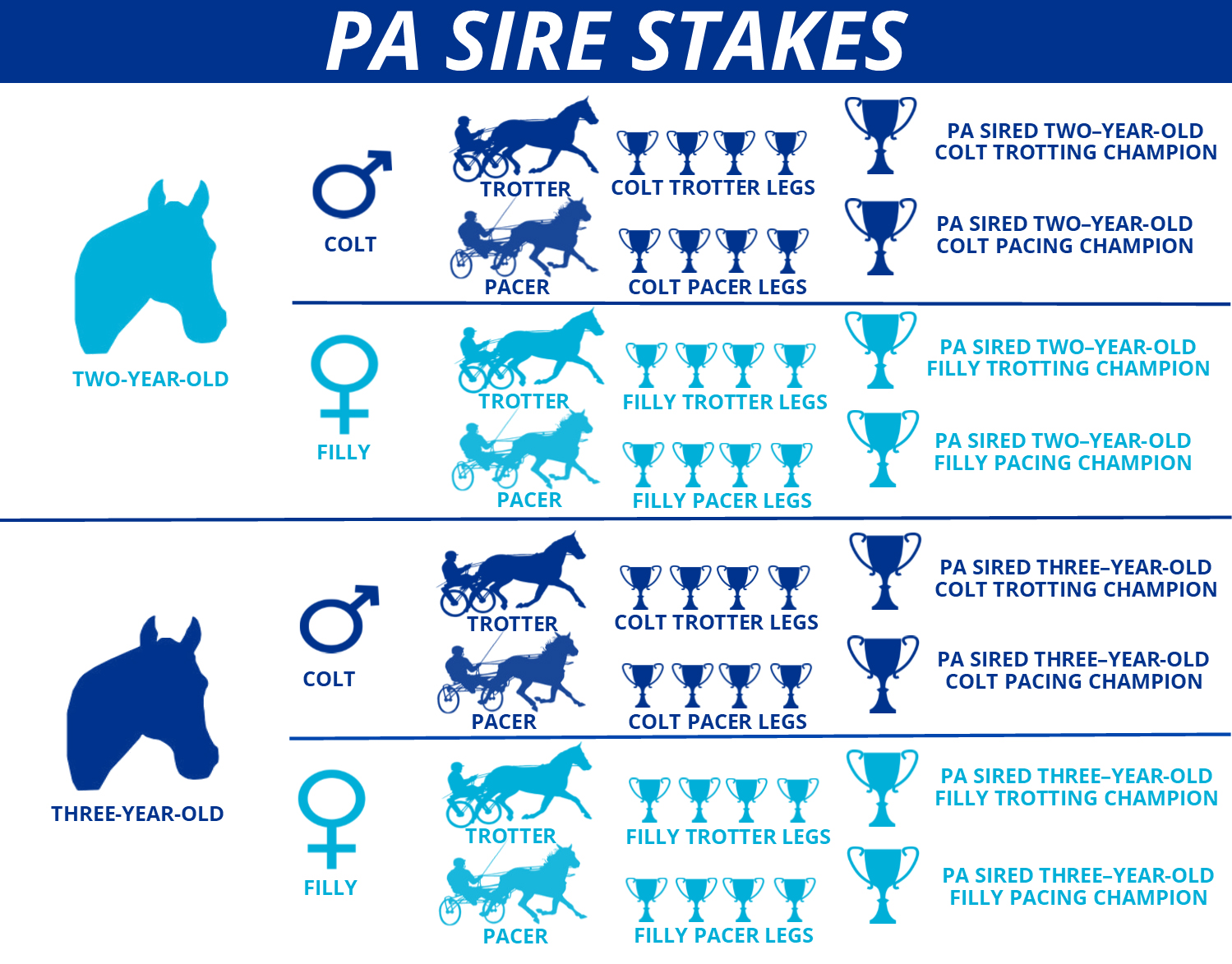 How do Standardbred horses get their names?

One of horse racing’s most iconic traits is its creative horse names. But there is a method to the madness, and quite a bit of regulations as well. Every name must pass USTA rules. Basically, if the name is 18 characters and under, isn’t of a vulgar nature and hasn’t already been used or isn’t too similar to an already-used name, it’s fair game.

With hundreds of thousands of names in existence at once, no wonder owners have to get so creative. Some classic naming strategies include blending the sire’s and the broodmare’s names, such as, “Green War” out of “Greenery” and “War Front.” Another popular style is going the more-serious, prestigious route, like “Hambletonian.” And still others choose to go as off-the-wall as possible, like “Little Brown Jug.”

Gallop, Eagles Gallop! Congrats to PA's own Philadelphia Eagles on their victory at the 2023 NFC Championship Game.

You don't have to be great to start, but you do have to start to be great.

In honor of our foal cameras, lets learn some Foal Facts! #DYK during a foals first month of life it will gain more than 3 pounds each day! They slow down a little when they are 2-3 months old, and only gain 2-21/2 pounds per day.

Make sure to check out our Live Foal Cameras at https://pennhorseracing.com/foalcams

Download your free Penn National Past Performance for February 1 at https://pennhorseracing.com/wager-warriors/ ...

Ladies and Gentlemen our broodmares of Whysper Wynd Farms. 🐎 ...

Join us Tonight for Wager Warriors - Foaling Edition! Dawnelle Mock will be joined by special guests Justine Howell from Whysper Wynd Farm and Jenna Reigle from Delaware Valley University! Tune in at 6:30pm to learn about foaling and our Live Foal Cameras! ...

It's our favorite day of the week #WagerWednesday! Here are some Wagering Terms you should know. Good Luck and Happy Wagering 🍀 ...

Our Foal Cameras are now LIVE at Whysper Wynd Farm! Learn more about how Whysper Wynd prepares for foaling season.

Make some smile today and give a compliment today! #NationalComplimentDay ...