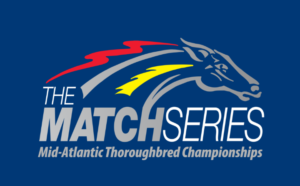 The MATCH Series moves to Hollywood Casino at Penn National Race Course June 1 as part of a major racing program featuring eight stakes worth a total of $1.3 million.

With 12 races planned, the program will span the afternoon and evening. There is a special first post time of 2:45 p.m. for the Saturday card.

Under a new 2019 format, each MATCH partner racetrack hosts one race from each of four divisions on the same day. Penn National, the second stop on the MATCH schedule, will offer the following series stakes: $100,000 Chocolatetown Sprint (3-Year-Olds and Up Sprint—Dirt Division), $100,000 Pennsylvania Governor’s Cup (3-Year-Olds and Up Sprint—Turf Division), $100,000 Penn Ladies Dash (Filly and Mare Sprint—Dirt Division) and $100,000 Susquehanna Stakes (Filly and Mare Long—Turf Division).

Nominations for all stakes on the June 1 program close Wednesday, May 22.

The $500,000 Penn Mile, a grade II turf stakes for 3-year-olds—the richest race of the year at the Pennsylvania track—has become a fixture on the first Saturday in June. Other stakes on the card are the $200,000 Penn Oaks on grass and two $100,000 dirt sprints for Pennsylvania-breds: the Danzig and the New Start.

The Penn Mile and the Pennsylvania Governor’s Cup are part of the Penn Gaming Racing Challenge, which links stakes in various divisions at the company’s U.S. tracks.

The Pennsylvania Horsemen’s Benevolent and Protective Association and Penn National management in April received approval from the Pennsylvania Horse Racing Commission to reduce the pari-mutuel takeout rate for Pick 4 wagers by one-third to 15% for the June 1 card. The track plans three Pick 4s, including one featuring the MATCH Series stakes.

Penn National hosted two MATCH stakes when the series returned to the calendar last year after 16 years on the shelf and was a part of the series’ initial run from 1997-2001.

“The return of the MATCH Series to Penn National on Penn Mile Day last year was a very positive development, and we’re looking forward to an even bigger day this year with four MATCH stakes on our biggest program of the year,” PAHBPA Executive Director Todd Mostoller said. “The series is not only lucrative for horsemen but it has shown that cooperation is possible when it comes to the scheduling of stakes in the Mid-Atlantic region. Another important goal is to offer a strong program for bettors, and the PAHBPA was happy to help push for a takeout reduction for Pick 4 wagers that day.”

As was the case when the series began April 20 at Laurel Park in Maryland, custom past performances for the full program at Penn National will be available for free via a link at the top of the Equibase.com home page courtesy of the MATCH Series partners.

The series got off to a strong start at Laurel with average field size of 9.75. The four winners that afternoon were Hillside Equestrian Meadows’ Laki (3-Year-Olds and Up Sprint—Dirt Division), Tom Grady’s Dirty (3-Year-Olds and Up Sprint—Turf Division), Cash is King and Jim Reichenberg’s Ms Locust Point (Filly and Mare Sprint—Dirt Division) and Madaket Stables, ERJ Racing, Elayne Stable 5 and Bouchey Thoroughbred Ventures’ Secret Message (Filly and Mare Long—Turf Division).

This year’s MATCH Series offers $2 million in purse money, $375,000 in owner and trainer bonuses and up to $40,000 in breeders’ bonuses for horses bred in Maryland, New Jersey and Pennsylvania or certified in Delaware. After Penn National, the series travels to Delaware Park July 13, Parx Racing Sept. 2 and Monmouth Park Sept. 28.