It is becoming an annual fall tradition, be it at Churchill Downs, Santa Anita or Keeneland. A horse trained at Parx arrives at the Breeders’ Cup, gets ignored in the betting and dominates a BC race.

Three of the best at Parx trained the winners: John Servis (Jaywalk), Carlos Guerrero (Spun to Run) and Butch Reid (Vequist). It was actually Reid’s second BC win as Afleet Again ran away from the field in the 2011 Marathon.

Few deserved this win more than Butch and his wife Ginny, linelong race trackers who looked like they had their horse of a lifetime heading into the 2019 Triple Crown season. Maximus Mischief was easily the best 2-year-old stabled at Parx since Smarty Jones. The colt was a real threat to win the Kentucky Derby. Then, he got hurt and the dream was over almost as soon as it started.

The Reids have been winning races together for years. They had that BC win and a Grade I win with Poseidon’s Warrior, but they don’t have zillionaire owners who spend millions at the sales for horses that win the seven-figure races.

But they do have terrific owners like Tom McGrath’s Swilcan Stable. It was McGrath who, on Reid’s recommendation, bought Vero Amore for $15,000 at the 2013 Timonium Sales. She finished second in three stakes, including losing a photo in the 2014 Black Eyed Susan Stakes. 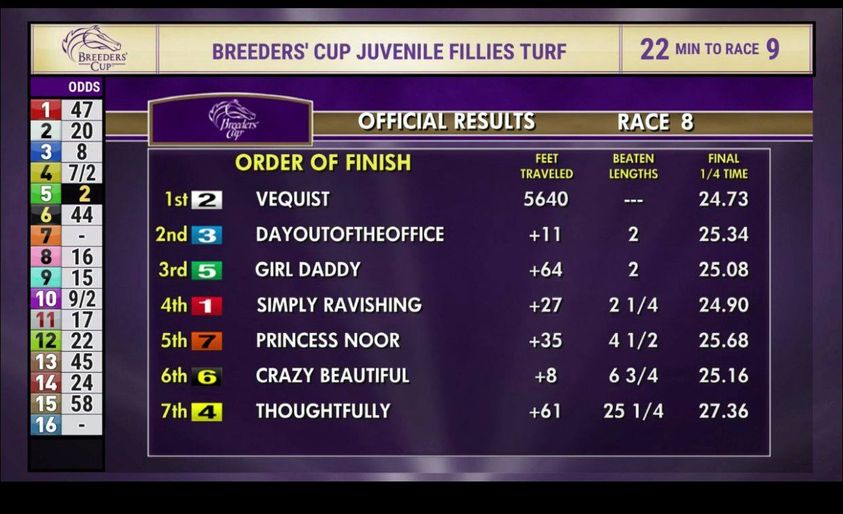 Vero Amore was a nice race horse, but she will be known into the future as the dam of the 2020 2-year-old filly champion, Vequist, a McCrath homebred. The brilliant daughter of 2016 Derby winner Nyquist got the trip in the BC she did not get when second to Dayoutoftheoffice in the Frizette. Jockey Joel Rosario never left the live rail with Vequist and ran by the filly in the stretch she could not catch at Belmont Park.

The Reid entourage was supposed to end up at the Breeders’ Cup event Friday night to celebrate, but it wasn’t really their style.

“It was a little too stodgy,’’ Butch said.“Everybody’s got jackets and ties. We got (brother) Brian and the crew. It wasn’t really the right crowd for us.’’

So they took good care of the manager, got a nice table at Jeff Ruby’s in Lexington and had “plenty to eat.’’

So where does this win rank?

“That was the biggest, plus it gets you the champion,’’ Butch said. “I wasn’t sure I’d ever train a champion in my career.’’
Hopefully, there will actually be a 2021 Eclipse Award ceremony that the Reids can attend when Vequist is officially named division champion.

After her first race, an inch loss at Parx, Gary Barber and Adam Wachtel bought interests in Vequist. She was sent to the Grade I Spinaway as a maiden and and blew away the field by almost 10 lengths. She finished second by 2 lengths in the Frizette. But there was no doubt about the Juvenile Fillies. Dayoutoftheoffice got an easy lead on a speed-favoring track, but Vequist was always in range. When Rosario asked her to go through a tiny hole between the leader and the rail, she was very eager and powered home a decisive 2-length winner.

Vequist left Kentucky for Florida Sunday where she will hang out at Dr. Barry Eisaman’s farm for 45 days before Reid meets up with her at Palm Meadows Training Center in Boynton Beach, Fla. She will train there over the winter, hoping to return to Kentucky next spring for the Kentucky Oaks at Churchill Downs.