Horse racing — like any sport — can only thrive when its spectators believe that the action and results unfolding before them are pure and free of corruption. That hasn’t always been the case for Pennsylvania, but if a series of new measures designed to restore integrity and public faith in the Commonwealth’s horse racing industry are any indication, Pennsylvania could soon be a national case study in how to reinvent oneself and win over a new generation of racing fans.

That’s a big deal for a state whose equine industry creates 22,000-plus jobs and contributes more than $2 billion annually to the state’s economy.

“In any industry — and any company, for that matter — there are going to be people who don’t always play by the rules, but they are by no means the norm,” said Pennsylvania Horse Racing Association (PHRA) president Pete Peterson, referring to a series of scandals that unfolded within the state prior to 2017.

“In talking with leaders of the state’s various horse racing associations, it is clear to me that they all want a level playing field and that anyone who doesn’t play by the rules needs to be held accountable,” said Peterson. “So, as the industry works to ensure everyone is playing by the same set of rules — and rooting out the bad eggs, our association’s goal is to focus on the positive aspects of what horse racing brings to the table in Pennsylvania, because, for every negative story, there are at least ten positive ones that deserve to be told.”

A consolidation of resources

One of the biggest steps in breaking Pennsylvania stereotypes was the creation of the PHRA itself, an organization whose sole mission is to promote horse racing in the state and attract new (and younger) fans.

The association, composed of more than a dozen stakeholders in the racing and breeding community, was founded in 2018.

Before the PHRA, those stakeholders worked largely independently, with marketing campaigns that often overlapped, leading to inefficient use of the industry’s marketing dollars. Under the PHRA, those same players have a shared voice, a shared marketing budget and a common goal: to breathe new life into Pennsylvania’s horse racing and breeding industry.

“It’s all about a consolidation of resources,” said Peterson. “Individually, the PHRA stakeholders are all strong, thriving organizations, but together, we’re even stronger.”

Changing the face of racing 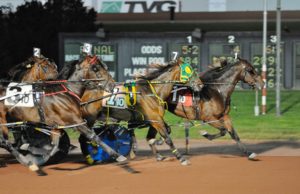 For an industry looking for a public relations turnaround, Peterson was a strategic pick to lead Pennsylvania’s new racing association. He had served for many years as the spokesperson for the Pennsylvania Equine Association and boasts an extensive background in governmental, political and non-profit communications, including a five-year stint in Washington DC as a press secretary to Congressman Curt Weldon, of Pennsylvania’s 7th district — as well as a lifelong passion for the sport of horse racing.

Peterson is joined at the PHRA by Ashley Eisenbeil, director of marketing, who made a gamble when she left the Maryland Jockey Club to work with a Pennsylvania racing commission that was still dealing with controversies of the past.

Beyond the PHRA, and beyond the team selected to lead it, the biggest piece of Pennsylvania’s plan to restore its reputation has been its devotion to implementing processes and policies designed to prevent the scandals of its past from happening again.

“Pennsylvania is one of the first states to implement out-of-competition testing,” said Peterson of the testing procedures put in place by the Pennsylvania Horse Racing Commission in 2017, which includes random testing of any horse while in training and horses registered to race in Pennsylvania. “We’ve talked to a lot of different horseman and leaders in the state, and the consistent message from everyone is that they want a level playing field. That’s our number one goal.”

To accomplish that goal, Peterson points to Pennsylvania’s self-funded testing program, in which a number of horsemen groups have agreed to allocate a portion of their purse and breeder incentive funds to the State Horse Racing Commission so that it could maintain a strong and robust testing program.

That investment includes a $300,000 donation to the University of Pennsylvania School of Veterinary Medicine for research that will combat gene doping, using advanced detection technology.

Pennsylvania is also home to the Pennsylvania Equine Toxicology and Research Lab, one of the top horse toxicology laboratories in the U.S.

“If you look at the past five to seven years, our state’s horse racing leaders have emphatically said ‘no more’ when it comes to corruption and have put policies in place to make that happen,” said Eisenbeil. “In five more years, our hope is that people look at Pennsylvania in a different light — that they’ll look at our state and not remember the bad decisions of a few people but instead see the hard work of so many others and see our industry as something they aspire to be more like.”

Open
In honor of #NationalAllAmericanPetPhotoDay, we're

In honor of #NationalAllAmericanPetPhotoDay, we're hosting a photo contest! Tag us in photos of your All American pet, and we'll pick a winner to receive a PHRA wine cooler! Entries close at 9am on Monday, July 13th! ...

Open
There's no better time to be repping Pennsylvania

There's no better time to be repping Pennsylvania horse racing now that racing is back! Swing by our @oldsmokeclothing store for some awesome Pennsylvania racing swag! ...

Open
Wager Warriors is back this week! Join Mike & Mike

Wager Warriors is back this week! Join Mike & Mike on Thursday at 7:30PM to catch all things betting basics! If you're interested in being a guest handicapper, fill out the form here: https://bit.ly/2VwZ3mq ...

Open
Need to brush up on your program knowledge now tha

Need to brush up on your program knowledge now that racing is back in PA? Head over to our website to learn about all things wagering: https://bit.ly/2YKbblV ...

Open
Wager Warriors is back! Join Mike & Mike from Post

Wager Warriors is back! Join Mike & Mike from Post Time on July 9th to learn about all the betting basics. Interested in being a guest handicapper? Sign up by filling out the form here: https://bit.ly/2VwZ3mq ...

Open
This year the Sweet Karen Scholarship, sponsored b

This year the Sweet Karen Scholarship, sponsored by the Harness Horse Youth Foundation, has been dedicated in loving memory of Beverly Breniser. This year's recipient is Katie Eick. She has been selected to receive the $1000 scholarship.

Interested in sharing your wagering expertise with the rest of the world? Now's your chance! Sign up to be a guest Wager Warrior by heading to the link in our bio and filling out the form! Guest handicappers also get to take home a PHRA swag bag! ...

Open
"Focus on your goal. Do not look anywhere but ahea

"Focus on your goal. Do not look anywhere but ahead." #WednesdayWisdom

Open
Do you follow all of our social media accounts? Be