Skip to content
The biggest stakes race night of the season to date at Hollywood at Penn National Race Course took place on Friday, June 3rd, with the highlight of the stellar card the $400,000 Grade 2 Penn Mile. The 3-year-old gelding Wow Whata Summer delivered the highest winning payout in the nine year history of the race at final odds of 83/1. The brilliant ride of jockey Tyler Conner was the talk of the horse racing world, as he guided the James Lawrence II-trained gelding to a 1 1/4 length win over the favorite Annapolis, trained by Todd Pletcher.

“It was very unexpected,” Tyler said. “I was probably more surprised than anyone else! Everything worked in my favor. I didn’t really go to plan, I didn’t expect to be in the lead, but my horse got a little rank, and I kind of just let him do his thing and be comfortable. When I got to

the top of the stretch, and nobody was really running at me, I thought I had a real chance. It was the biggest win of my career so far.”

The soft-spoken jockey was born into the business. “My mom rode before I was born, and my dad (John Conner) was a trainer, so I just kind of grew up around the game,” he described. “I was grooming for my dad when I was 11 or 12 years old, before I started riding.”
Tyler dropped out of high school and gravitated to another speed-driven field. “I was riding motorcycles but I got hurt, and I needed a job, so I just decided to start riding. I never sat on a horse until I decided to be a jockey. I liked and loved the horses, and cared for them, but I had never had any interest in riding them.”
He enjoys being around the horses more now since becoming a jockey. “You get a little more of a connection with them that way. It seems that I’ve grown very close to a lot of them over the 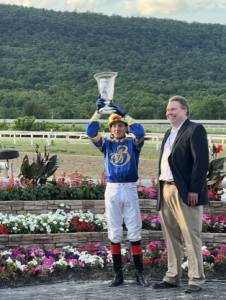 years. I really enjoy the animals, especially the ones that really try and enjoy their job also. It’s very rewarding.”
Riding can be stressful and the competition can be tough at times, but Tyler stays focused, and remains positive. “The competitive part is fun. Since I grew up racing motorcycles, it’s kind of natural to me. I think it makes you better, having competition like that, especially if it’s a close and friendly competition. I think it’s good for the mind and good for your riding. It can be stressful, but I think the competition part is actually easier than maybe the stress of owners and trainers, with having to find just the right horses.”
Tyler’s father John is now partners with trainer Erin McClellan, both in the business and in life, and they train under McClellan-Conner Racing. Tyler rides the horses they train, and they are both very proud of his hard work and riding success. “It’s been exciting to see the things Tyler has done as a rider and how much he has grown,” Erin said enthusiastically. “He is naturally extremely athletic, and that helps in so many ways. He has great rhythm with a horse; he’s always in sync with them, and that I think comes from both his athleticism, and his love for them.”
Erin points out that it was his his destiny that led him to where he is today. “Horsemanship is in his blood,” she said. “His mom was a jockey, and was extremely talented in the morning jogging, and his dad is undeniably one of the best horsemen I’ve ever known. Seeing him blossom as a rider and get the opportunities he is getting is something for which I’m extremely proud and grateful.”
Tyler is a crucial part of McClellan-Conner Racing, not only for his riding, but for his feedback on the horses. “I value his opinion when he talks to me about the horses after he gallops or breezes them in the morning,” Erin said.
As for the Penn Mile on June 3rd? “I just literally got my voice back from cheering so loud!” she laughed. “He rode the Penn Mile brilliantly. He was aware of how the soft turf changed the dynamics of the race, and used it to his advantage, knowing the horse under him (Wow Whata Summer) was taking to it.”
Looking ahead to a busy summer season, Erin is excited to have what she calls a ‘nice line-up of PA-bred 3-year-old fillies’, like Nail Polish and New Hire, both bred by Arrowwood Farm, and for Tyler to to ride all of their horses. “I trust him. Tyler appreciates the hard-knocking war horses as much as the young horses who draw the attention of the media, just the same as I do. More than anything, his compassion for horses is what I appreciate the most about him.”
On June 11th, Tyler made the trip to ride at Gulfstream Park for trainer Saffie Joseph Jr., and 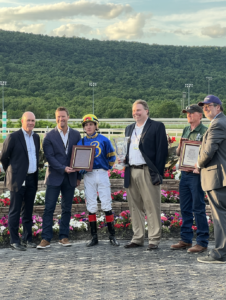 had a win in a Maiden Claiming for horses 3 years old and above with Kanthartana owned by Stefania Farms, LLC. He hopes to ride there again in the future. Additionally, he’d love a chance to ride in Kentucky some day.
Tyler looks forward to continued success at Penn National, and keeps busy with a daily schedule that includes jogging and galloping horses most mornings and riding at night. He admits that every day is different and every horse is different. “You always ride different horses, and the schedule is different, and even the weather can play a part.”
The always-humble and hard-working rider sums it up perfectly. “You just go in with the same mindset, and do what you can to have the best results.”
Tyler Conner
Career
6235 starts
Firsts – 991
Seconds -976
Thirds – 947
Total earnings $21,000,784
Wow Whata Summer
Summer Front-Loan Guarantee, by Malibu Moon
Trainer: James Lawrence II
Owner: Jeremy Brooks
(7-2-0-2)
Career Earnings $296,000

Check out the link in our bio to tune into the 2022 fair harness livestreams! ...

The weekend lineup is here! Head to the track this weekend for something fun to do. ...

Hambletonian winner Captain Corey trotted away to victory in the $300,000 Earl Beal, Jr. Memorial Trot, tying his lifetime record of 1:51, on August 21, 2021 by two and one-quarter lengths.

With the winner’s share of the purse at $150,000, Captain Corey surpassed the $1 million mark in career earning. It was his fourth win in just six starts that. He was trained and driven by Ake Svanstedt for the S R F Stable, Knutson Trotting and the Midnight Sun Partners.

FREE PP'S ALERT🚨
Click the link in our bio to download this weeks free PP for @pid_casino! ...

Cheers to the weekend! Head to the track for some fun this weekend. ...

"Knowing yourself is the beginning of all wisdom."
#wisdomwednesday ...