“It was like the Lord was holding the reins [of Secretariat] . . . and whispered in his ear, ‘Go.’ It was . . . a supernatural experience.” –Pat Lynch on Secretariat’s Belmont Triple Crown win

The Pennsylvania Tally
The adult Thoroughbred, Trotter or Pacer weighs in at around 1,100 pounds. With 7,462 starting Thoroughbreds and 6,666 Standardbreds in purse races (2018 stats) in Pennsylvania, that translates into 15,540,800 horse pounds of speed, stamina, and heart that require energy converted from nutrients including 388,520 pounds of quality hay ingested daily. 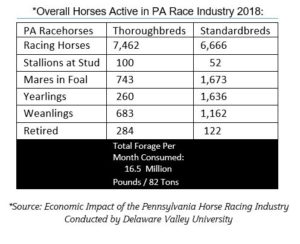 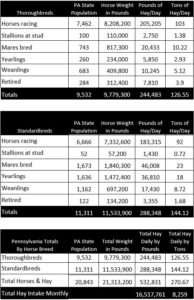 Says David Wade, manager of North View’s three facilities, “We go through A LOT of hay! It’s an alfalfa and orchard grass mix. The hay has gotta be clean, visually attractive, but most importantly, it’s gotta be palatable to the horse. You can put down the prettiest hay, but if it’s not palatable, the horse is going to turn its nose up at it.” Wade notes, “Hay that pleases horses depends on when it’s cut, at what stage it’s cut and that it’s not got chemicals on it. Some producers spray a drying agent chemical on the hay so they can harvest it faster. Horses don’t like it and will walk away.”

Sixty miles west of North View, Arentz Hay &amp; Grain, Inc. in Littlestown, PA supplies harvested forages for Hanover Shoe Farm—the largest Standardbred breeding farm in the World—delivering 1,900 tons of hay and 1,700 tons of straw annually with 80% of the hay and 100% of the straw sourced within Pennsylvania.

Note: Included in those eating are over 100 retired broodmares, visiting out-of-state broodmares and auction sale horses. “We’re trucking in hay and alfalfa 5 days a week—no moldy or dusty hay, only show-horse quality hay. It’s pretty consistent deliveries year-round except when it slows down a bit after the sale,” said Kyle Arentz. To achieve a consistent, quality-forage product, Kyle Arentz fertilizes every field immediately after each harvest (1st and 2nd cuttings) and concurrently sprays alfalfa fields post-harvest against alfalfa weevils (spray that only holds a two-week lifespan to eliminate any possibility of toxic residuals).

The Remembered Champions
Not to be forgotten are the horses retired from racing—an additional 572,000 pounds of daily hay consumed by retirees. According to the PA Department of Agriculture, Pennsylvania has over 50 nonprofit organizations and programs catering to retiring racehorses.

Over 26,000 racehorse “retirees” have been retrained for “civilian life”—AKA less speed, less road warrior and
redirected into other skilled occupations such as companion, pleasure mount, hunter, jumper or dressage.
They now live as someone’s “one and only BFF” to evermore happily munch in Pennsylvania’s pastures reminiscing about the good ole days and their <sigh> need for speed.

The Overall Impact
Hay prices of timothy, orchard grass and alfalfa vary greatly by growing conditions, weather impacting harvests and season of purchase. Factor in seasonal grazing at pasture and calculating the total hay dollar-value consumed by Pennsylvania’s equines involved in horse racing is challenging. New Holland Hay Auction (March 2019) sold grass hay at $300 per ton and alfalfa at $400 per ton. Coupling those forage prices with over twenty-thousand hay consuming race horses, it’s clear; the Pennsylvania horse racing industry is feeding the ag industry . . . along with its race horses.