Skip to content
As his star filly Just One Time crossed the finish line in a command performance in the Grade I Madison Stakes at Keeneland on April 9, owner and breeder Donny Brown’s phone started blowing up with congratulatory messages from friends and family, and continued for hours after the race and into the next day. He and his co-owners just knew that she was special from the first time they laid eyes on her. 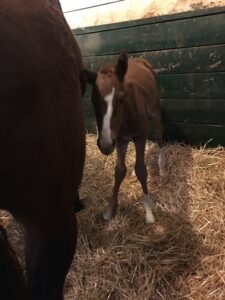 “We purchased her mom (Ida Clark) in 2017, when she was already in foal to Not This Time,” he explained. “We had a great love of Speightstown mares, and we actually had started to look at Liam’s Map (2015 Breeders’ Cup Dirt Mile winner), the brother of Not This Time, and it wasn’t working out for us, and then we kind of caught on to Not This Time. I had a really good agent at the sale named Chad Schumer, who said ‘I have a wonderful-looking mare here, that I think if you can afford her, you need to buy her’, and we did!”
Donny brought Ida Clark back to Pennsylvania, and on April Fool’s Day in 2018, which was also Easter Sunday, he got the good news. “Susan at Hempt Farm called me, and said ‘you have a new baby on the ground!’”
There was something special about this filly from day one. “The people on the farm said, from the beginning, it wasn’t that everything was perfect, there was just something they liked about her personality, and just the way she acted, even around other horses. It wasn’t that she looked so special, it was just that they thought she had a personality and a way about her that made her different from the other foals.”
He and his partner, Tom McClay, took her to Virginia to break her, and then she came up to Penn National Race Course with Mike Salvaggio. “Mike kept calling Tom, telling him ‘I think this filly can run!’, and Tom called me and said we should take our time with her, that she was really starting to show something and to just make sure everything’s right.”

Then others started noticing her speed and ability. “I got a call from trainer Brandon Kulp who watched her with an exercise rider, and he said ‘you

really have something special there!’ That was what woke me up.”

Her first race was May 14, 2021, at Penn National and even though she had some gate trouble, she came back with a win. She traveled to Presque Isle Downs in July of 2021 and won the Malvern Rose Stakes, following up that start with a loss at Presque Isle, her only loss in her career, in the Lady Erie Stakes. Returning to Penn National in September, she had a win in an Allowance event, and it was in the New Start Stakes in October that she caught the eye of now part-owner Todd Mostoller.
“Earlier that week, I had another horse win a stakes race at Presque Isle Downs,” Todd remembered, “and I go to Donny Brown’s restaurant (Black N Bleu) a good bit, and they had told me how they were rooting for me, and we always root for each other.” Todd decided to make the trip to Penn National to lend his support to Donny on that October night. 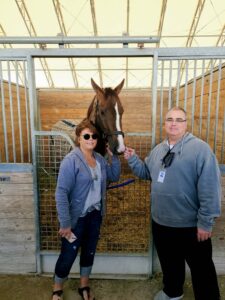 “I was standing in the paddock, and the horse came up, and they took the blanket off, and I saw her for the first time. I was pretty impressed with how she looked physically. Then she won by 5 3/4 lengths without being asked in the New Start Stakes, and there were some pretty decent horses in there. There was a horse by the name of Oxsana in there that had only gotten beaten by two lengths in the Prioress (Gr. II) at Saratoga, so it was a pretty good race with some good quality from the standpoint of the type of race it was. I watched her cross the finish line, watched her come back, and it looked like she did nothing!”
Over a few celebratory beverages after the race, a deal was sealed and Todd now owned 40% of this super filly.
She added another win, this time at Gulfstream Park on January 29 in the Inside Information Stakes (Gr. II) for her first start with trainer Brad Cox, despite some gate issues.
“Ever since she’s gotten to the races, the gate is an issue,” Todd said. “She reared up prior to the break at Gulfstream, and didn’t break the way we wanted, so we went back to a breaking blanket.”
Both Donny and Todd were on hand for the Madison Stakes at Keeneland. Donny admits to feeling some butterflies in the paddock before the race.
“We know that she has the speed, to be tactically, in a race,” Donny said, “but when she gets behind a field like that, and in Pennsylvania we were never used to seeing that, we felt like she could be on or near the lead whenever she wanted to be. But when she broke behind that field at Keeneland, which we knew was a very good field, I was scared to death for the first half mile! I had hope because I had seen what she had done at Gulfstream, where she broke behind that field, and came and got ‘em! So I was just remembering what Joel Rosario said to me at Gulfstream. He said ‘once you get her out from behind the other horses, and there’s no dirt in her face, she’ll take over’. I was just hoping for that to happen again. I knew she was behind all of the other horses, and I was just hoping that she could get out and make her run, and she did!”
Todd was thrilled to see the filly overcome a rough start, again, out of the gate and grind out another impressive win. “If you would have told me before the race that the best closing Grade I sprinter in the country for the last 3 years (Bell’s The One), whose career I’ve followed and who I have an immense respect for, was going to go by us at the 1/4 pole and open up 2 lengths, and we were going to run that horse down, I’d have told you you were crazy!”
“She continues to make mistakes, but it’s pretty amazing; you make those mistakes in a stakes race, any stakes race or graded stakes, you’re not going to win. But she’s just immensely talented, and if she can stop being her own worst enemy, I think there’s more there, and I think she can develop further. She just wants to beat you!”
After the race, with a smile from ear to ear, Donny rushed to see his filly and how she looked after the race.

“Your first thought is to see the horse, make sure she’s okay, give her a pat on the neck and thank her, and then it’s the enjoyment of the win!” he

said. “It was just what everybody says. So overwhelming and so unbelievable that you just try to catch your breath. Keeneland was very good to us, directing us where to go, and helping us. And they had a special celebration for us in the Director’s Room for a champagne toast in a room full of history.”

“It’s not only good for us, it’s good for Pennsylvania,” Donny said. “I’ve gotten so many congratulations and questions from people that are either breeding in Pennsylvania or considering breeding here. It’s such a good program. I’m really hoping that, with Just One Time’s accomplishments, other people in the state realize that a good horse can come from anywhere, and especially now, from Pennsylvania, because the program is so good! If it wasn’t for the PA Breeders Program, and we believe in it, we wouldn’t even be doing this. I wouldn’t be having this experience!”
Cover photo by Averie Levanti