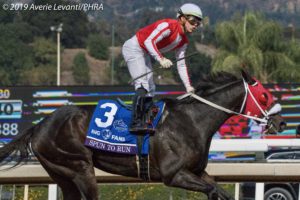 The setting is simply the most breathtaking in American sports, the San Gabriel Mountains beyond the backstretch, separating Santa Anita Park from Pasadena, a testament, perhaps, to the possible.

When Spun to Run began flying around the old racetrack on Breeders’ Cup Saturday, essentially in a race of his own, the colt’s trainer Carlos Guerrero had one overwhelming thought as he watched on the giant screen in the paddock.“It felt like I was watching the same race he had run at Parx,” Guerrero said.

And why wouldn’t he? Spun to Run was doing exactly what he had done three weeks before at his Parx base. The purse had gone from $100,000 in the M.P. Ballezzi Appreciation Mile to $1 million in the Breeders’ Cup Dirt Mile. The result was exactly the same. Spun to Run had blown away the best older milers at Parx, and then followed it up by blowing away the best milers in the United States and the best horse in the history of South Korea.

“I told Irad (Ortiz), just get him out of the gate and let him run,” Guerrero said.

So America’s top jockey did exactly that.

Ortiz asked Spun to Run to go from the gate so the brilliant three-year-old son of Pennsylvania-Bred Hard Spun went immediately to the front. The other nine horses were chasing from there and never got close to catching up.

It was Korea’s superstar Blue Chipper who did the chasing to the far turn. Kentucky Derby morning-line favorite Omaha Beach chased Spun to Run home in the stretch, but there was never any chance Blue Chipper, Omaha Beach or any of the other nine horses were going to catch Spun to Run on this day. The colt was simply too fast.

“I think today wasn’t riding; I was just a passenger, to be honest,” Ortiz said.

Spun to Run emulated Parx-based Jaywalk from 2018 when the two-year-old filly wired her field in the Breeders’ Cup Juvenile Fillies, giving the track Breeders’ Cup winners in consecutive years.

“This horse, the more you give him, the more he wants,” Guerrero said.

This was, in fact, the colt’s fourth race in 61 days. Guerrero won his first graded stakes when Spun to Run won the Grade III Smarty Jones Stakes on Smarty Jones Day.

After he crushed the field on Oct. 12 at Parx, Guerrero thought about giving the colt some time off. Owner Robert Donaldson, sensing the moment, suggested they take a look at the Grade I Dirt Mile. Once it was clear Spun to Run was still training brilliantly, Guerrero said go. So they sent the horse to California and the horse sent them back home with the biggest win of their lives.

Donaldson, who first went to the races at Garden State Park, with his then girlfriend and now longtime wife when they were both 14, had Guerrero purchase Spun to Run for $64,000 at the 2018 Timonium Sale that is held annually right after the Preakness. The colt just went over $1 million in earnings and who knows what he might yet accomplish.

Guerrero knew early on he had a special talent, but the colt’s spring campaign ended after surgery for an entrapped epiglottis. Something, however, was missing in his training when he brought him back. Once the trainer outfitted the colt with “those big red blinkers”, the change was instantaneous.

Spun to Run was third in the Haskell off a four-month layoff, and followed that up with the Smarty Jones win, a close fifth in the Pennsylvania Derby after a tough trip, and now these two mile wins—which produced the two fastest two-turn Beyer Speed Figures by a three-year-old in 2019, a 110 at Parx and a 109 at Santa Anita.

“This puts me at a different level as a trainer,” Guerrero said during the victory ceremony above the winner’s circle.

One of his Parx owners, Marshall Gramm of Ten Strike Racing, was crying when he came to see Guerrero after the race. It was that emotional.

“He has this unique stride,” Guerrero said of Spun to Run. “The way he strides out and the way he looks, he just looks like a good horse, like a star.”

A Parx star clearly has been born.

The massive crowd at one of America’s iconic race tracks. The attention that the winner of a Breeders’ Cup race gets. It is intoxicating and it was that for Guerrero.

“I can’t explain it, but I definitely liked it, let’s put it that way,” Guerrero said.

And he would like to do it again. With this brilliant colt, this Spun to Run, there is every chance he will.

Open
In honor of #NationalAllAmericanPetPhotoDay, we're

In honor of #NationalAllAmericanPetPhotoDay, we're hosting a photo contest! Tag us in photos of your All American pet, and we'll pick a winner to receive a PHRA wine cooler! Entries close at 9am on Monday, July 13th! ...

Open
There's no better time to be repping Pennsylvania

There's no better time to be repping Pennsylvania horse racing now that racing is back! Swing by our @oldsmokeclothing store for some awesome Pennsylvania racing swag! ...

Open
Wager Warriors is back this week! Join Mike & Mike

Wager Warriors is back this week! Join Mike & Mike on Thursday at 7:30PM to catch all things betting basics! If you're interested in being a guest handicapper, fill out the form here: https://bit.ly/2VwZ3mq ...

Open
Need to brush up on your program knowledge now tha

Need to brush up on your program knowledge now that racing is back in PA? Head over to our website to learn about all things wagering: https://bit.ly/2YKbblV ...

Open
Wager Warriors is back! Join Mike & Mike from Post

Wager Warriors is back! Join Mike & Mike from Post Time on July 9th to learn about all the betting basics. Interested in being a guest handicapper? Sign up by filling out the form here: https://bit.ly/2VwZ3mq ...

Open
This year the Sweet Karen Scholarship, sponsored b

This year the Sweet Karen Scholarship, sponsored by the Harness Horse Youth Foundation, has been dedicated in loving memory of Beverly Breniser. This year's recipient is Katie Eick. She has been selected to receive the $1000 scholarship.

Interested in sharing your wagering expertise with the rest of the world? Now's your chance! Sign up to be a guest Wager Warrior by heading to the link in our bio and filling out the form! Guest handicappers also get to take home a PHRA swag bag! ...

Open
"Focus on your goal. Do not look anywhere but ahea

"Focus on your goal. Do not look anywhere but ahead." #WednesdayWisdom

Open
Do you follow all of our social media accounts? Be